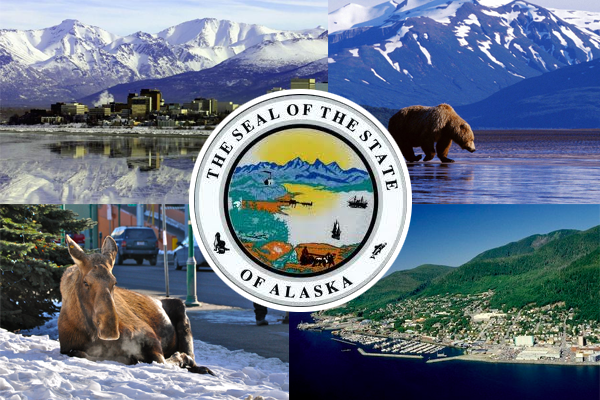 Known for its stunning scenery, Alaska is often touted as one of the most beautiful places to live in the country. Admitted as a state in 1959, Alaska was the 49th area to be granted statehood. Situated on the Arctic Circle, the area detached from the lower 48. With a total area of 1,717,854 km squared, Alaska is the largest state by size in the country. Alaska contains more area than the 22 smallest states combined, and the three largest states combined. Only 18 countries are larger than it. The population of only 735,132 gives it the distinction of being the least densely populated state in the union. Home to the ten highest mountains in the country and the tallest point in North America, Alaska has a gigantic coastline and territorial waters that extend into the territorial waters of Russia. Six distinct areas make up the state including Southeast, Southwest, South Central, North Slope, Interior, and the Aleutian Islands. The local economy is dominated by the gas and oil industries, with 80 percent of the revenue generated by petroleum extraction. In addition to exporting oil and gas, the chief export of the state is seafood, namely crab, salmon, and cod.

The history of Alaska is unique in that unlike other states it was first colonized by Russia. The first European ship to make it to Alaska is widely considered to have reached the area in 1732. Russian explorers described the natives they first made contact with as ‘bearded men who pray to the icons.” Native people first migrated to the area thousands of years ago. Interestingly, according to genetic studies, the native peoples of Alaska are not closely related to other native groups prominent in the Arctic, South America, and throughout North America. The indigenous people of Alaska include the Inupiat, Yupik, Aleut, Tlingit, Haida, Tsimshian and Northern Athabaskan. The area was purchased from Russia in 1867 for $7.2 million. The largest city in the state is Anchorage, and the capital is Juneau.

Since 2000, Alaska has experienced population growth of more than 13 percent, and home appreciation has been on the rise. Unemployment in the state is well below the national average, and the state has seen positive job growth in recent years, and public school expenditures per student are significantly above the national average.

Despite the higher cost of living, many veterans find Alaska is the ideal place to purchase a home.

In order to obtain a VA loan in the state of Alaska, there is no requirement for a termite inspection, although it is important for borrowers to keep in mind that homes located in “red” or “blue” avalanche areas are not eligible for a VA loan.

A property tax exemption is available to some veterans. The exemption amount is up to $150,000 and is contingent on a disability of 50 percent or more having been sustained during service.

To find out the exact dollar amount you qualify for, call the VA Home Loan Centers Applications Support Desk at 888-573-4496 or fill out the application for VA Loans located here.

Return to page with all listed states.