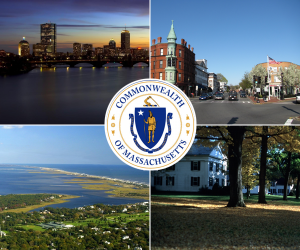 One of the original 13 colonies, Massachusetts is of great historical significance to the United States. Inhabited by indigenous Algonquian-speaking tribes, the first English settlers to land in Massachusetts came into contact with the Wampanoag tribe in 1620. Early European settlement of the area came in two waves, the Pilgrims who settled in Plymouth and Weymouth and the Puritans who came a few years later, who established the Massachusetts Bay Colony in what is now Salem. Pre-Revolutionary era Massachusetts is largely noted for bloody conflicts between the English and indigenous tribes, English and French and the hysteria surrounding the Salem Witch Trials. During this period, the academic institution Harvard University was founded. The Battle of Lexington and Concord and The Battle of Bunker Hill were the first two engagements of the Revolutionary War, a point of great pride in the state. The Battle of Bunker Hill is commemorated to this day in the state as Evacuation Day, Boston Public Schools close down in observance of the day British forces evacuated the state.

6,692,824 people reside in Massachusetts, making it the most populated of any of the New England states. The capital and largest city in the state is Boston, which is noted for its uniquely old architecture, love affair with its professional sports teams, seafood, academics, the biotech industry. Although, by population, Massachusetts is not in the top ten, it does maintain the sixth highest GDP per capita in the nation. The per capita personal income of residents is $53,221, the third highest of among U.S. states. Thirteen Fortune 500 companies are located in Massachusetts, and as of 2013 the area has the sixth-largest number of millionaires living in it in the country.

From its picturesque coastline to its quaint towns, Massachusetts is full of charm. Beyond Boston, the state is noted for Cape Cod, a popular summertime vacation destination. The Cape (as it is known) is a premier spot for beaches, art, and antiques.

There are six military bases located in the state, including Hanscom Air Force Base, Fort Devens, and the Solider Systems Center.

As of 2012, the state was home for more than 388,000 veterans. Veterans and active-duty service members who plan to use a VA-backed home loan in Massachusetts are required to submit a Net Tangible Benefit Worksheet, and a termite inspection is required. If the property has an individual sewage disposal system, such as a septic tank, there must be evidence the system meets the Massachusetts Department of Environmental Protection Title 5 standards. This is to be provided by the local health authority.

The average home cost in Massachusetts is $315,200. Home appreciation in the past twelve months was four percent.

VA Home Loan Information For The State of Massachusetts

They made the whole loan process go smoothly. Even when the seller took us to the 11th hour, VA Home Loan Centers came through and got us funded and documents signed on time. by: Dave and Lisa B.