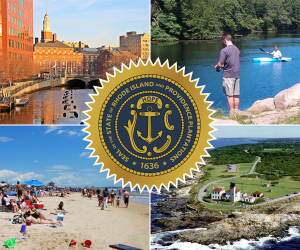 The smallest state by area, and the eighth least populous, Rhode Island only covers a total area of 1,214 square miles. North to south the area contains 48 miles and east to west the area is contained to 37 miles. Despite its tiny size and small population, the 1,050,292 residents packed into the state make it the second most densely populated state in the country. Located in the historically important and equally scenic New England region of the U.S. Bordered by Connecticut and Massachusetts, it also shares a water line with Long Island. The state is officially nicknamed “The Ocean State” because of its beautiful coastline which includes a number of bays and inlets. Major cities in the state include Newport and Providence. Providence is a bustling hub of everything from major industry to higher education, while Newport is known for its beautiful, historic mansions and picturesque coastal charm.

Rhode Island proudly boasts itself as the first of the original thirteen colonies to declare independence from British rule. Interestingly, Newport Rhode Island was the site of both the first American circus in 1774, and the first American polo match in 1876. On the forefront of nineteenth-century progressive politics, Rhode Island was the first state in the Union to send troops in response to President Lincoln’s request for military support. In 1866, the state did away with racial segregation in the public schools statewide.

Known for its high-quality seafood, shellfish is extremely popular in the state, with clam cake being a culinary mainstay. Clam Cake is a deep fried ball of dough with chopped clam pieces inside. Coffee and doughnut shops are abundant in the state; no state has more per capita. The local economy has been historically rooted in fishing. Today, health services are the largest industry followed by tourism. Rhode Island is ranked as the fifth most energy efficient state in the country.

The average home cost in the state is $210,600. The cost of living is 20 percent higher than the American average. Public Schools spend over four thousand dollars more per student than the average U.S. school expenditure.

Rhode Island contains several military bases, including Naval Station Newport and South Point Judith. The veteran population of Rhode Island is just below 72,000. For veterans and service members who will purchase a home in Rhode Island using a VA home loan, a Net Tangible Benefit worksheet, as well as a termite inspection are required.