888-573-4496 [email protected]
A 3rd party broker that specializes in mortgages guaranteed by the US government
VA Home > Blog > Honor Role: Veterans of Comedy 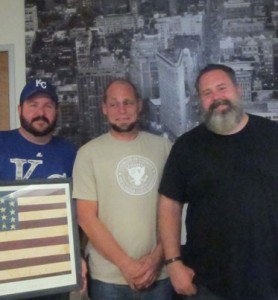 The Veterans of Comedy hanging out in VA Home Loan Centers’ offices. From left to right Will “Will C” Clifton, Erik Knowles, and Shawn Halpin. Photo credit: Amanda Rosenblatt

The Veterans of Comedy have the charm turned on, even when they are off duty. When they came to VA Home Loan Centers for an Honor Role interview, they were already ribbing each other before the interview. “Just because they HAVE snacks,” Shawn Halpin said to his partner-in-comedy Will C Clifton, “doesn’t mean you have to have them!”

“They say we’re hilarious,” Will says of their stand-up routine. “Our moms, mostly,” Erik Knowles, who rounds up the trio, added.

The Veterans of Comedy is a group of individual comics and friends who tour together to entertain active duty military, veterans and civilians. They joke about matters in their personal lives, including the events that shaped them during all their bouts of military experience. They are locally performing in San Diego four times this weekend, on April 24th and April 25th.

Prior to becoming a Marine, Will joined the Air Force in 1988 and has been doing comedy for over two decades. His first brush with comedy was doing an open mic at the La Jolla Comedy Store in 1995. “I had no idea what to do, so I called them, and they said ‘bring three minutes of material,’” he remembers. “I said ‘what’s material?’ and they said ‘write three minutes of jokes!’”

He said his first time on stage was horrible, but the adrenaline was his drive to continue improving his craft. Will’s back story is also fascinating not only for his service to our country, but because he survived and taught himself to walk again after a bad car accident, and he attributes singer Kanye West in helping him re-launch his career.

Erik joined the military in 1998 via the Marines, as well, and he was literally thrust into comedy because of the military. “I was a cut up,” he says, of his behavior while he was deployed. “I was always making everybody laugh.”

“My sergeant, instead of writing me up again, he signs me up for this talent show at a Christmas party,” Erik recalls. “I had to get up in front of a whole squadron of 600 Marines.” He was given a week to prepare, but got lots of laughs roasting his whole chain of command. He’s even locally been dubbed San Diego’s favorite stand-up comic.

Shawn was part of the military from 1991 to 1995 and knew he wanted to be a comic from the first time he saw Saturday Night Live as a kid. “I was watching SNL my whole life and I found out you could do it as a career,” he says. All three of them note their comedic inspirations as SNL, Redd Foxx, Carol Burnett, Eddie Murphy, Bill Cosby, and George Carlin.

One of Shawn’s most surreal moments was performing in Los Angeles at The Comedy Store’s open mic and realizing that Carlin was watching the set. “Every one of us were just nervous,” he recalls with a smile. “Every time someone came off (their set), he’d say ‘great job!’”

One of the biggest hurdles that the comedy group experiences is civilian assumptions, perhaps keeping them from growing a bigger audience. “People get confused,” Will says. “They think it’s just going to be military humor, but we’re just here to do a stand up show. We just happen to be veterans.”

“We do have war stories and military stories, but mostly we tell stories about what other comics talk about,” Erik added. Shawn explained too that doing military comedy is a route to involve their fellow veterans, but that civilians shouldn’t feel left out or alienated from their routine. 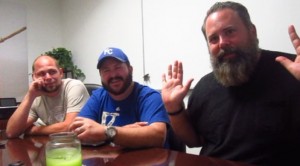 They all agree that their comedy, performed as individuals, is a form of therapy not only for them, but for their audiences. The comedy bringing the three together to help others, when most of their ticket sales goes to nonprofits like Wounded Warrior Project, American Soldier Network and USVETS, is humbling to them all.

“I can’t house all the homeless veterans or feed them all myself, but I’ve been given this gift of comedy,” Erik said. “I’m only good at THIS.”

Will encourages veterans and civilians alike to find their outlet for dealing with problems, like they do with comedy and Post Traumatic Stress Disorder. “PTSD is real,” he says. “You can be a civilian (with PTSD). PTSD is not just related to the military.”

All of the comedians agree that veterans slipping through the cracks with the VA is a real problem. They encourage fellow veterans to take advantage of organizations helping them understand their benefits. This is especially true of the VA home loan.

“I used it with my ex-wife,” Will said of the program. He said it was an easy process for him and adds emphatically that all veterans, even active duty, should take advantage of it.

“At the time, [the VA home loan] put us in our dream home,” he shared, then turning to humor. “I didn’t know that dream was gonna turn into a nightmare with her.”

All of the visiting veterans were surprised to learn that you can use the VA home loan more than once. You can also have a low credit score, which was good news for Erik, who said his credit score was low – “I think it’s a 9,” he said jokingly.

In the end, other than the ultimate goal of making audience members laugh so much that they snort drinks out of their nose, their mission and message is noble. “Pursue your dreams as a veteran,” Shawn says, of those transitioning back into everyday life. “Invest in yourself and your dreams.”

WARNING: Some videos of the comedians performing you will find on YouTube may have adult content. To see some of the guys stand up acts, click the links to see Shawn’s spoof video on the “10 Hours of Walking” social experiment and his “How to fix check engine light” video. See Erik Knowles joking about the McRib and TV commercials by clicking here and see Will joke about his size and his family life by clicking here.

Click here to learn about the VA home loan.

Contact VA Home Loan Centers to learn more about the VA home loan or use our convenient chat feature at the bottom of this page. Call us at 888-573-4496.