888-573-4496 [email protected]
A 3rd party broker that specializes in mortgages guaranteed by the US government
VA Home > Blog > Honor Role: Memoir of a Citizen Warrior 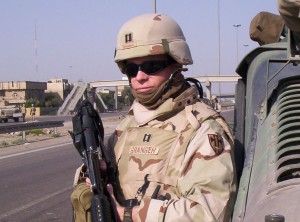 Monty during an emergency HMMWV repair on the road from Camp Victory, Baghdad, Iraq, to Abu Ghraib Prison. From April 1, 2005

Montgomery Granger is a well-known veteran who has worn many hats in his lifetime. When we reached out for an Honor Role interview, he was humble and had great stories to share.

“I was a member of small Brigade Liaison Detachments (BLD’s) within the Enemy Prisoner of War (EPW) Military Police Brigades,” Montgomery aka Monty tells us. “I was responsible for medical, preventive medical, and environmental coordination for the EPW camp and U.S. personnel.”

Monty’s military history is wide-running, and more than a paragraph can encapsulate. Prior to his time with BLD’s, he was a U.S. Army Hospital staff officer, U.S. Army Field Hospital Company Commander, an Infantry Battalion Medical Platoon Leader, an Officer Candidate, a Medical Assistant in a medical battalion, and a Combat Medic (91A) with the 40th (MECH) Infantry (CA USARNG).

Aside from the military, Monty has held many jobs and educational distinctions. He has taught students, been a Dean of Students, was a Director of Health, Physical Education, and Athletics, among many other educational positions.

“I joined the Army National Guard in 1986 to serve my country, learn a valuable skill as a Combat Medic, earn some extra pay, and to repay my college loans,” he says, of joining the military. “After five years and loans repaid, I became a U.S. Army Medical Service officer through O.C.S.”

The military creates very serious bonds between those who serve together, which Monty is very passionate about.

“They are like brothers and sisters, some like parents or guardians,” he says, of fellow military peers. “Battle buddies, commanders, colleagues, chaplains, etc. Too many to count!”

The biggest relationship that comes to mind when he thinks of his military peers is Captain Jasper Rogers. Monty goes on to explain their relationship, “His self-deprecating humor, integrity, work ethic, and humanity comes to mind. We served together with the 343rd BLD in Iraq, OIF III, 2004-2005.”

“He and I exchanged letters, you know, the letters you hope your loved ones never have to read,” he remembers. “We promised each other we would escort the other’s casket back home if the time came. Morbid? Reality.” 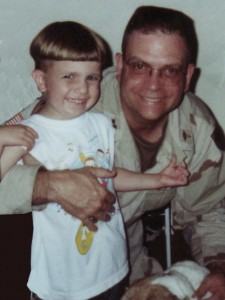 Monty with one of his children

Monty recalls the day he left the States for Iraq. Admitting how he broke down thinking that he was already mourning his own death, and the loss his family would have to go through.

“I think in order to function properly in a war zone, one needs to accept one’s own death,” he reflects. “I pulled it together on the plane. Jasper helped me through that rough patch. Neither one of us had to deliver a letter, thank God.”

Some of the most touching moments he experienced in Iraq were from when they would deliver extra care packages to locals. Extra Gatorade, sports balls, school supplies, and more would be delivered to grateful adults and kids.

“Once, while escorting two Iraqi Ministry of Human Rights officials at Abu Ghraib prison, they turned to me as we were saying good-bye and said, ‘Thank you for what you’re doing for us here in Iraq,’” he tells us. “’We appreciate you leaving your family and risking your life for us.’ Awesome times!” 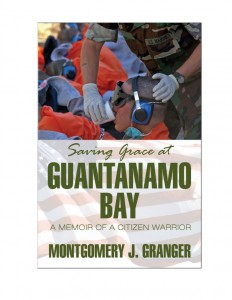 In Monty’s book, “Saving Grace at Guantanamo Bay: A Memoir of a Citizen Warrior” he kept a personal journal while at Gitmo AKA Guantanamo Bay, Cuba, from February to June of 2002 as a ranking U.S. Army Medical Department officer with the Joint Detainee Operations Group, Joint Task Force 160. “In 2010, out of frustration over erroneous media reports about the place, I turned my journal into a memoir.”

“I was upset about how Gitmo was portrayed by the media,” Monty shares. “There was never any mention about what a great job the Military Police and others did taking care of the ‘worst of the worst’ from the Global War on Terror.”

Monty recalls the thrashing emotions he experienced, from hate to empathy, about the detainees he helped care for. The second edition of the book is out, on paper and digital, which he dedicated to his wife Sandra and his five children. “One of whom, Theodore, was only two days old when I left to train for the Gitmo deployment.”

What is the most unusual, fun fact about Monty? “My favorite job ever was working at Disneyland in Anaheim, CA,” he shares. “I worked the Davy Crockett Canoes and truly enjoyed making people happy every day.”

“Every day is a blessing,” Monty says, to inspire others in the military. “I am so very grateful for everyone’s service, especially those who joined after September 11, 2001.”

“I was blessed to have served beside some of the finest human beings on planet earth,” he continues. “I will never forget the sacrifice, professionalism and selfless service I witnessed every day I was in the military. Hooah!”

On VA benefits like the VA home loan and the GI Bill, he definitely has some gripes. “I know how I felt visiting the VA over time for this or that,” he says. “The effort is there, but until they get the right sized staff and the right person for the right job [there] to meet the needs of veterans, there are going to be problems.”

Monty compares working at Disney and says if the VA were more focused on customer service, as well as VA employees being taken care of, things would work a little better. “From the street sweepers to the Imagineers, everyone at Disney is expected to produce at the highest possible level, every day,” he says. “There MUST be some way that the VA can model the Disney way of doing business – from greeting to tracking information, to landscaping, and maintenance.”

The author and veteran shares a great idea with us. “It doesn’t need to be a five-star operation, but if you create [VA] hospitals surrounded by social services, homeless veteran housing, educational, and technical training centers, recreation, and leisure areas, you would have a self-contained community of veterans for veterans,” he states. “This would create a sense of belonging and camaraderie that existed while they were on active duty, but without bullets flying or a sergeant in your ear!”

If you want to read Monty’s works, visit his literary website here. If you want to be surprised at how communicative he is on social media, follow him on Twitter at @MJGranger1.

If you are interested in a VA home loan, a VA refinance or need assistance selling your home, call 888-573-4496. Tweet us at @VAHomeLoanCtrs and check out our previous Honor Role stories here.