A soldier does not volunteer to serve their country for a reward or to be remembered in history. We, as a society thankful for these sacrifices, create monuments and memorials for their actions.

Just as any object made by man, the trials of time will wear down or damage these memorials. EP Henry, an American-made company that has been around for over a hundred years, could not stand by and let these monuments shrivel away, or not be created at all due to lack of resources. The company that specializes in beautifying backyards created a movement called HeroScaping®.

HeroScaping® began formerly in 2011, even though EP Henry had been donating a vast amount of materials to veteran-oriented projects decades earlier. A specific project caught the company’s eye and was the catalyst for HeroScaping® to start.

“We were approached by a group of local citizens who reached out to us to see if we would be interested in donating Hardscaping materials for a memorial they wanted to construct in their town,” he says. Brooklawn, New Jersey Chief of Police Steven Saymon was dismayed that there was a 9-11 memorial service in New York City that was invite only, and wanted something local and accessible to everyone.

“He was able to acquire artifacts from each of the sites targeted on 9-11, so they came to us with a rendering and asked us to donate the pavers and walls for their monument,” JC said. “His dedication and determination really inspired us to think about the program in a broader sense.”

EP Henry is a company where multiple former owners served in the military, and for this fact, JC feels pride. “This organization is the classic American dream, and it’s not lost on me that it survived and prospered over the years, and through wars, because so many men and women gave their all.”

“It’s our duty to give back,” he states of HeroScaping®. “It’s our privilege to be included in creating monuments and memorials that honor these brave Americans.” 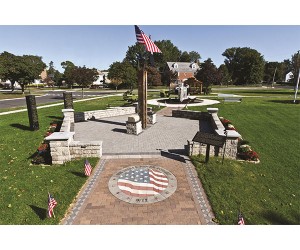 Brooklawn 9-11 memorial. Materials were donated solely by EP Henry and they received the Presidential Volunteer Service Award for helping with it.

One of JC’s favorite stories, and that of his coworkers, is of the Global War on Terrorism monument. “It’s located in Bucks County, Pa., and Chip Bunch of Shan-Gri-La Construction tells the story here in this short video and explains how this program really changed him. “

JC finds working with the HeroScaping® project to be a surprisingly smooth process. “Aside from just figuring out minor internal processes so that we could simplify and streamline the application process,” she says, “we found that everyone involved in any of the projects has been wonderful to work with.”

The biggest hurdle in keeping HeroScaping® going is in finding more volunteers, AKA HeroScapers™. He describes who they need as “authorized contractors that are willing to volunteer to install the memorial or monuments.” “This way, we can help committees connect with contractors in their area when they have an idea and plan, but need the technical expertise and skilled labor to make it happen.”

Though veterans do not serve us for the memorials or benefits they receive, JC does agree that veterans are encouraged to look into programs such as the VA home loan. “Of course, veterans should learn about and take advantage of all programs that are available to assist them that meet their needs.”

Right now, the HeroScaping® program only takes place around the tri-state area in the northeast, but EP Henry has patriotic aspirations. “We are working towards making this a national program,” JC says. “A program where contractors from anywhere in the U.S. can become a HeroScaper™.”

To volunteer or donate to HeroScaping®, click this link. EP Henry also has other ways to keep in touch, including links to social media, by clicking here.

VA Home Loan Centers is proud to serve veterans, active duty and qualifying surviving spouses across America in funding and finding their dream home. Chat with a representative on our site, call 888-573-4496, or tweet us @VAhomeloanctrs.