888-573-4496 [email protected]
A 3rd party broker that specializes in mortgages guaranteed by the US government
VA Home > Blog > Honor Role: Bands for Arms – The First & Original 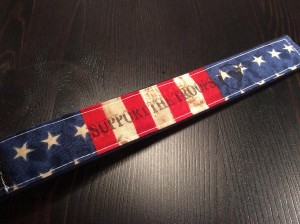 Pellegrino Bracelet, made from Navy utility pants. Was designed by Mark Pellegrino of the series “Supernatural” for B4A. Photo credit to ShopB4A.com

You may have seen a craze earlier this year of a small company making bands, bracelets, and other accessories out of retired military uniforms. It’s an amazing concept, but not a new one.

Bands for Arms, also known as B4A, began in January of 2010 via founder Nick P. Mendoza III. The back story of how the company came to be will likely leave you with tears in your eyes.

“Bands For Arms bracelets are handmade bracelets made out of old, donated military uniforms with 50 percent donated to various organizations that support our military,” Nick tells us at VA Home Loan Centers.

Nick is currently in the US Navy as an Intelligence Specialist and has been with this branch for close to a decade. He also went to college with an education in the diverse areas of culinary arts, photography, firefighting, EMT, and music.

“B4A began because of a bullied Marine, who I met in 2007 who made me a Bracelet made out of his and 17 other Marines’ uniforms,” Nick shared. This friendship came to be when he was assigned to work in the USS Blueridge’s ship galley at Mess Deck Master at Arms. 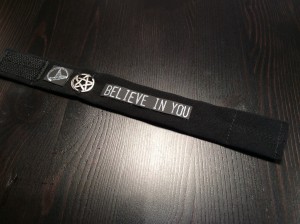 This all black Carol Bracelet with the words “Believe In You” on it was designed by a fan and supporter of B4A named Carol Dobson. Photo credit to ShopB4A.com

“There was a Marine platoon aboard our ship during a deployment who had sent to me a Marine,” Nick recalls. “This Marine was quiet and wouldn’t speak, but was the hardest worker assigned to me.”

Nick noticed a group of other Marines from his platoon were acting less than respectful to him. “They were all making fun of him, laughing during meals, mocking him, dropping their trays in front of him to make him clean it up, and just pointing at him. I decided to take this Marine under my wing and befriend him, acting like an older brother.”

Though Nick knew he might face some judgments or confusion by being a Sailor, who hung out with a Marine, he knew defending and supporting a person in need was more important. He found that by having constant conversations with this man about everything from school to religion, it gained the attention of their peers.

“Soon thereafter, Marine after Marine was wondering what we were talking about, soon joining me and the bullied Marine,” he shared, proudly. “During the four-month deployment, 17 Marines had finally befriended the bullied Marine.”

The last time he saw the man whose life he bettered, he was given a gift. A bracelet with the body made from 17 different uniforms to represent his new friends, plus a hoop representing Nick and a button representing the friendship he and Nick cultivated first.

“Promise me that you will continue to mentor and help Marines after our platoon leaves,” Nick recalls the young man asking of him. “May this bracelet be a constant reminder of your help and what you have done for me.”

Nick has since mentored 500 Marines, but sadly, the catalyst for Nick’s social change never got to see the amazing things he has done. “In 2009, the bullied Marine was deployed to Afghanistan and during a convoy, his Humvee ran over an IED, killing him and the other Marines in the vehicle. I found this out by the Marine’s mother on my 29th birthday.”

“When I approached his tombstone after visiting with his family, an encased letter that I had written to him before leaving my ship, was encased in glass,” Nick reveals. The letter was one from Nick given to the Marine saying he was proud of him and wishing him luck for his future. “This letter was found in his uniform that he died in during the attack of his vehicle. His parents received it and encased it in glass.”

During the long drive from the Marine’s grave to his home, he contemplated the bracelet that was given to him. Nick knew what he had to do.

“If I sell these bracelets, I want the proceeds to return back to organizations that help our military,” he says. “Next, I wanted to come up with a catchy name for the project –  coming up with the name, Bands For Arms, bands being the Bracelets for the armed forces.” 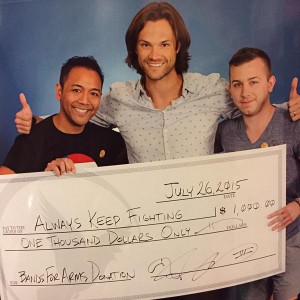 Nick and another along with one of B4A’s many celebrity supporters Jared Padalecki with a check for charity.

On January 8th 2010, he applied for a business license from his local city hall. During the last five years and counting, B4A has assisted over 100,000 service members and families. They work off of a network of over 200 military volunteers, along with dependents, so B4A has no employees.

“The biggest story that has stayed with me was assisting the families of the Sandy Hook Elementary School murder,” he remembers. “I designed a Bracelet for Sandy Hook and called it The Innocence Bracelet. With this Bracelet, I raised $10,300 with 100% returning back to the families to assist with funeral costs.”

Nick and those who help B4A are very selfless individuals. Nick is still serving his country while taking on this vast project to help others. Though he does what he does to help others, it rightfully bothers him that he is not credited with starting this movement.

“I really don’t mind when someone takes my idea to inspire them to begin a uniformed bracelet company,” he says, of copycat companies. “But when you lie to your audience and make false claims, it’s fraudulent and misleading.”

Nick and his allies have worked hard to shut down impostors who are not actually giving money to charity, as they claim. Their continued focus on B4A and the good they are doing is the most important thing.

“I want to give back as much as I can back,” Nick says. “My promise in helping others hasn’t stopped, and I will continue to mentor those who come into my life.”