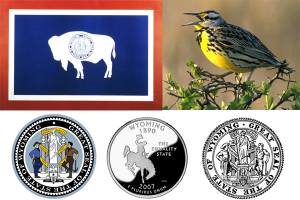 With the western two-thirds of the state covered by a combination of mountain ranges, foothills, and rangelands, Wyoming has a unique terrain that demonstrates the meeting of the Great Plains and Rocky Mountains. The continental divide runs down the middle of the state. The vast blue skies, uninterrupted mountain vistas, create a truly awe-inspiring backdrop. The best place to discover the American West, Wyoming offers extensive opportunities for outdoor recreation, and portions of Yellowstone National Park and Grand Teton National Park are located in the state. Wyoming has a population of 582,658. The expansive area makes it the 10th most extensive in the country, but the small number of residents makes it the least populous and second least densely populated. 91 percent of the state is classified as rural. The largest city and capital of Wyoming is Cheyenne. Similar to other states in the region, the history of the state is largely influenced by the numerous Native American groups that originally occupied the area. Tribes that originally called the area home include the Crow, Arapaho, Lakota, and Shoshone. Originally under the control of the Spanish Empire and then later a Mexican territory, Wyoming became an American Territory in 1848 after the conclusion of the Mexican-American War. Interestingly, John Allen Campbell, the territorial governor gave women the right to vote in 1869, making it the first area in the country to extend this right. Additionally, the state was the first to elect a female governor when it elected Nellie Tayloe Ross in 1924. The 44th state in the country, the area was granted statehood in 1890.

Veterans purchasing a home in Wyoming using a VA-backed home loan are not required to submit a termite inspection. The average home cost in Wyoming is $204,100. In the past twelve months, home appreciation has been 2.5 percent. The unemployment rate in the state is nearly three points below the national average at 3.6 percent. Per student, public schools spend $18,832 per student nearly $6,000 more than the average American public school expenditure. Disabled veterans whose disability stems from their service time qualify for a property tax exemption of $3,000 of the assessed value of their home if the veteran has a disability of 10 percent or higher in Wyoming.

Wyoming has a veteran population of more than 52,600.

The Francis E. Warren Air Force Base is located in Cheyenne Wyoming. The base is one of the only three strategic missile bases in the country and is home to the 90th Missile Wing.