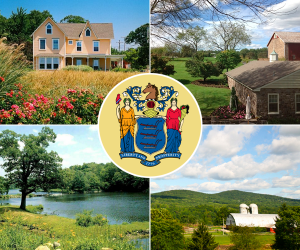 Located in the Northeast United States, New Jersey is a melting pot of culture. Nearly 20 percent of state residents speak a language at home other than English with Spanish being the most prominent followed by Chinese. The racial makeup of New Jersey is 69 percent white, 14 percent African-American, eight percent Asian American and nine percent other. The state has the eleventh largest population in the country with nearly nine million residents. Human inhabitation of the area began over 2,800 years prior to European settlement. Historical tribes indigenous to the area include the Lenape. Interestingly, the first settlements in the area were made by the Dutch and Swedish. The first colony established was known as New Netherland, prior to being annexed by the British in the 1660’s. One of the original 13 colonies, New Jersey, was at the forefront of the American Revolution. The constitution of New Jersey was penned two days prior to the Constitution of the United States.

Today, the state is known for beautiful beaches, gaming and a high standard of living. New Jersey holds the title of having the highest percentage of millionaire households in the country. The gross state product of New Jersey is in the range of $5 billion. The per capita income of $51,358 is the third highest in the entire country. With thriving pharmaceutical, financial and chemical development industries, New Jersey remains a great place to work and live. It’s also located near Philadelphia, New York City, and connects to the metropolitan area via a number of bridges and tunnels, including the George Washington Bridge, which is the most traveled bridge in the world. The capital is Trenton, and the largest city is Newark. The gambling hub Atlantic City is a resort town off of the ocean, originally established in the 1800s. Fashioned as an east coast Las Vegas, the Boardwalk of Atlantic City is extremely popular among tourists, especially during weekends in the summer.

Over 440,000 veterans call New Jersey home. For veterans and service members planning to purchase a home in the state using a VA home loan, a termite inspection is required. For properties that are new construction, the builder is required to provide an approved Home Owners Warranty policy, which can be accessed through the New Jersey home insurance program.

The average home cost in the Garden State is $273,700. Home appreciation over the previous twelve months has been 1.10 percent. Disabled veterans in New Jersey qualify for a full property tax exemption if they are 100 percent disabled.

How To Apply For A VA Home Loan In New Jersey:

Effective April 1, 2019, the fees for VA Appraisals in New Jersey are: