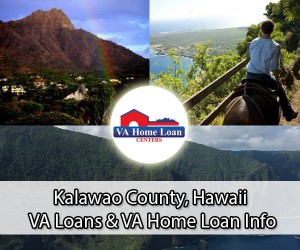 Located on the Makanalua Peninsula on the northern coast of the island of Moloka’i, Kalawao County is a separate entity from Maui County, which contains the majority of Moloka’i. Covering a total area of 53 square miles, the only community in the county is Kalaupapa. The population of 90 makes the county the second smallest by population in the entire country. The only county smaller is Loving County Texas. Originally a Fishing settlement with as many as 1,200 residents, Kalaupapa became the site of a forced leper colony. In the 1860’, those suffering from leprosy were exiled to Kalawao County. Enacted by King Kamehameha V, the law, which called for the isolation of individuals in Kalawao, remained in effect until 1969. Today most of the residents of Kalaupapa are people formerly isolated on the peninsula or their family members. The County and leper colony were the subjects of the 1999 film Molokai.

Kalawao County is home to approximately four veterans. Because of the tiny population no veteran services are available in Kalawao. However, these veterans can take advantage of what is offered in neighboring Maui County.

To obtain a complete listing of all VA approved condos in Kalawao County, contact VA Home Loan Centers at 888-573-4496.

Currently no VA approved condos are available in Kalawao County.

VA Home Loan Centers can provide immediate assistance with a condo approval project. Speak with a representative by calling VAHLC at 888-573-4496.