888-573-4496 [email protected]
A 3rd party broker that specializes in mortgages guaranteed by the US government
VA Home > Blog > Honor Role: Wings for Warriors 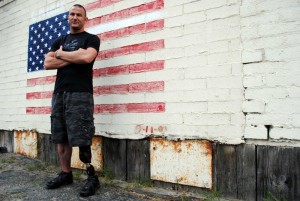 Anthony Ameen was a Hospital Corpsman in the Navy. He has extensive medical knowledge and has assisted many of his fellow veterans. He also nearly lost his life in combat while deployed.

“I was with the 2nd Battalion/7th Marines – 1st Marine Division and lost my leg in combat,” Anthony recalls to us at VA Home Loan Centers. “I nearly lost my right leg running to save the life of another wounded Marine.”

“During the recovery process, I was not only learning to walk again and how to deal with the emotional challenges I was suffering from,” Anthony says, “but all the while it was going on, I was denied health care and financial benefits from the Social Security Administration.”

After a two year battle to get benefits from the Social Security Administration, and fighting for four years to get back-paid from the VA to be proven 100 percent disabled, he knew enough was enough. “Once the money was awarded, I paid it forward and created a 501(c)(3) non-profit called Wings for Warriors. “

Wings for Warriors was founded in 2010 and has assisted over 1,200 wounded warriors. Their families have also benefited with support in travel costs, health care advocacy, counseling veterans on resources to use, and informing them of their benefits.

“Being a Hospital Corpsman, I knew what appropriate health care was,” Anthony vents. “I kind of became an expert in regards to the groups who are wrongfully denying these courageous and brave people who have a whole ‘nother fight when they come home to secure benefits.”

“My mom and dad in Phoenix wanted to be by my side for my 18 surgeries,” the organization founder says, on part of his motivation in why they assist with travel fees. “They had to take the time out of their lives and from their jobs to come to San Antonio to see me because the DOD, as well as Marine Corps and the Navy, at that time weren’t offering travel assistance.”

Wings for Warriors operates under a fully non-profit scale. Anthony says the entire operation is volunteer-driven – that they depend on a network of volunteers in the hundreds. Of all the people he has assisted, along with his volunteers, he gets emotionally overwhelmed recalling the stories of a few veterans and their families.

“There’s two stories that come to mind,” Anthony says. “Endless and priceless stories to me.”

“This man reached out to the organization a few years ago and said ‘I have an annual fundraiser we do for veteran non-profits and we are choosing yours,’” he recalls. “I thought it was a one-time thing, but it’s been ongoing relationship and he, as well as the event itself and all the people involved, gained us a substantial amount of money.”

“His son had a brain tumor while he was deployed and when he reached out to us, he said he needed help to go and see his son,” Anthony shares. “He didn’t even have to ask because he was raising all this money for us, but this guy raised more than anyone and he needed my help. We gave him and his wife travel assistance to see their son and I became like family with them all.” 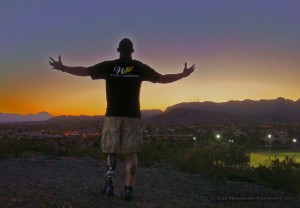 Another story that tugs on Anthony’s heart strings was of a solider, pointed out to him by an Army Captain, who was suffering from horrible PTSD. Wings for Warriors helped fund a trip to bring the man to a PTSD meditation retreat in Malibu, California. What happened next shocked him.

“We flew him to the retreat and in middle of it, I got a phone call late one night,” he remembers. “It was this guy [the solider]. He called crying, saying I changed his life.”

“I get paid in high fives, hugs, and late night calls like the one I mentioned,” Anthony states, with passion. “It’s validating to me when people thank me for what I do because I put so much energy and exhaustion into this.”

When Anthony thinks about his greatest influences in the non-profit sector, he has a lot of respect for Paul Rieckhoff. Paul created IAVA, which is the Iraq and Afghanistan Veterans of America organization.

“I wish I could meet Paul. If he would allow a mentorship, I would be on board so fast,” Anthony proclaims. “He got out of service, had an idea, took it, and ran with it. They have a network of over 200k members nationwide, raise millions each year, and help to create legislation through Congress that helps military families everywhere.”

“I was able to buy my first home with no money down,” he proclaims. “Although we focus on healthcare at Wings for Warriors, we know this benefit is one that veterans need to look at. It’s not just a benefit for themselves, but it’s for their families, too.”

As Anthony says, the VA home loan benefit is very easy to obtain. Since the VA does not actually administer the loan, work with an approved lender like us! Call 888-573-4496, chat with a rep on our site, or tweet us @VAhomeloanctrs.