They have assisted more than 18,000 veterans and survivors of those who have fallen. They have enthused over 50,000 American youths to volunteer in their communities in honor of a soldier who was perished in battle. Close to 50 veterans have graduated from their funded internship, and almost 100 veterans, including survivors, have become advocates for their cause.

We highlight the Travis Manion Foundation (TMF) for this Honor Role edition. TMF was founded in 2007, has one office on the East Coast, and another on the West Coast.

Molly Boyle of the organization shared with us that the organization came about when Janet Manion’s son, First Lt. Travis Manion, died in combat in Iraq. She started a foundation to help out families of those killed in action, as well as veterans who were able to return home. She was inspired by what her son said to her on his second and final deployment to Iraq: ‘If Not Me, Then Who?’

“TMF assists our nation’s veterans and families of the fallen, and honors the fallen by challenging the living,” Molly says, who specifically has the role of the Director of the Character Does Matter program. This program, through the TMF Ambassadors who lead it, encourage youth to volunteer in honor of the spirit of fallen soldiers. 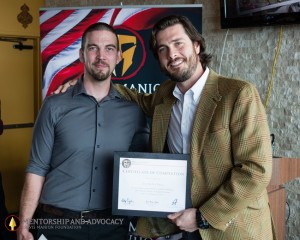 “The work that TMF does–directly empowering veterans, serving their families, and inspiring our nation’s youth–that spoke to me,” Molly says, who used to be an instructor at two colleges and has a master’s degree. “That was something I could get my arms around and that I knew was making a legitimate impact.”

“I have always found a passion for working with people, building relationships, setting up goals and knocking them down,” says Albie Masland, who is the Veteran Outreach Manager and has a liberal arts background. Albie first came across TMF when he courageously ran over 3,000 miles all over the country to honor fallen American soldiers.

“My work with veterans requires this passion every day,” Albie said. “My direct responsibilities include operating our West Coast Mentorship and Advocacy Program for Veterans (MAP-V), and building out relationships in the Southern California to advance the ‘If Not Me, Then Who?’ movement.”

The TMF team is comprised of 22 employees, 16 board members, and hundreds of volunteers, as well as partners. Those who work at TMF find that they tend to wear many different hats.

“No day at the Foundation is ever like the one before it, but I’m fortunate to have the support of a really committed and enthusiastic team,” Molly says. “Activities include everything from training veterans to speak to large groups of students on the importance of character, drafting educational curriculum for high school students who participate in our veteran-facilitated leadership courses, as well as organizing service projects throughout the country where students and veterans come together to give back in honor of fallen heroes.” 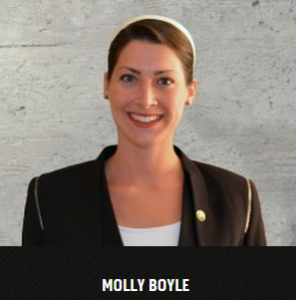 “I’m fortunate to have many friends who are active duty or veteran but good humans above all,” Albie says, of his connection to the military. “I, myself, have never served, but I have three brothers who served as Marines – two of whom are still Reservists,” Molly adds.

“We have dealt with veterans across the spectrum of transition and many of the stories demonstrate resolve and dedication through challenges/adversity,” Albie shared. “There are few things as rewarding as watching an individual overcome the obstacles of transition and end up in a position to give back themselves.”

“I’m constantly impressed by the veterans and families of the fallen who volunteer with our organization,” Molly said. “They’ve already given so much, and yet, that they have so much more to give.”

One story that Molly shared with us was a powerful one. A junior in high school, Chris, was sitting through a Character Does Matter presentation at a U.S. Naval Academy summer camp. During this, a slide show of those who had fallen happened to include a photo of Chris’ father, who had passed away in a helicopter crash while serving when Chris was very young.

“At that moment, Chris recommitted himself to service, and to honor the legacy that his father left behind with his own character,” Molly shared. “He went back to his hometown in Virginia Beach, completed several community projects to help others in need, and even delivered two presentations himself, about his dad, to his entire high school student body.”

“Talk about courage, leadership, and service? Chris had it in spades,” Molly said, with pride.

“I work with humans,” Albie states of frustrations on the job. “We can all be difficult and frustrating from time to time, BUT it’s good work and well worth the upside potential.”

Molly states nothing frustrates her about the job, but it’s difficult to keep up. “The Character Does Matter program has over 150 of the most enthusiastic, committed volunteers that are firing on all cylinders 24/7.” 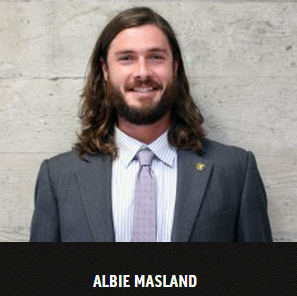 Albie’s inspiration comes from his parents. “The passion I have for working with people, veterans in this specific case, comes from their altruistic nature that was instilled in me at a very early age.”

“The person who has influenced me probably most in my life is my mom, Margie Boyle,” Molly states. “She’s the toughest and yet warmest person I’ve ever known. Along with my dad, she raised 12 healthy, though often difficult, children who try constantly to channel her generosity, resilience, humor, and good will.”

As far as important events on the horizon, Albie wants everyone to know there is a 9/11 Heroes Run event going on in many different American cities, but particular to San Diego, there is the 5K on September 13th. Molly is proud of a recent partnership with the USS Midway Museum, where volunteers deliver monthly Leadership Academy sessions to middle and high school students in San Diego.

“I respect service above all and to have the opportunity to serve those who serve is a true honor,” Albie says. “We consider ourselves an auxiliary to their continued missions of character, service, and leadership,” Molly states, on her pride of working with TMF and helping veterans.

“Information clarity could be better on the out-boarding process and at first contact by the VA,” Albie says of veterans feeling that they have to seek out their own benefits information. “BUT it’s been improving.” We at VA HLC agree with Albie, especially in concern with the VA home loan program.

For more information on the zero down payment, low-cost VA home loan, please call us at (888) 573-4496. We are also happy to connect on Twitter at @VAHomeLoanCtrs and on Facebook.