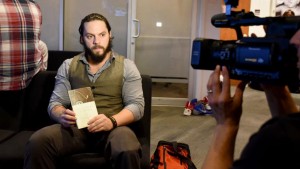 The WWE has been a renowned source of sports entertainment for decades. As with any industry, there is a need for new talent – the WWE, just like the military, needs able men and women to answer the call.

Michael Hayes answered the WWE’s call when the latest season of its competition show “Tough Enough” was in development. We were lucky enough to chat with him about his bid to be part of the WWE, his time in the military and how he overcame extreme adversity.

“In 2004, I joined the Army,” Michael tells us. “I was in a Humvee when we were struck by an an IED (improvised explosive device), which killed the three other men I was in there with. I was the only survivor.”

Michael was lucky to be alive, but he did not leave the accident unscathed. “The explosion was very flammable, so 65 to 70 percent of my body was burnt. I had a couple breaks in my hip, femur and foot, and I lost my leg above the knee.”

The veteran was obviously in pain and shock from his accident, but didn’t realize the extent of his injuries until trying to escape the wreckage. “I tried to crawl away, but couldn’t do it very well. I looked down and saw my leg, so I just kind of grabbed it and pulled it away with me.”

After surviving the physical chaos he went through, he then had to grapple with PTSD and other issues. “It wasn’t the easiest thing,” he shares. “I was a little lost after – the military has orders, training, and your career is laid out before you, but it was painful and difficult to deal with not knowing what to do with the rest of my life.”

When it came to getting himself back on track, he turned to a childhood love of wrestling and a connection through a friend. “I was always a wrestling fan,” he admits, with a chuckle. “In middle school, I told my mom I wasn’t going to college – I was going to wrestling school.” 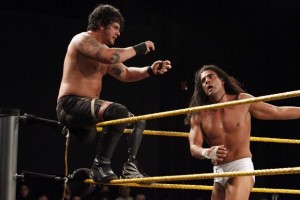 Michael’s favorite wrestler is Shawn Michaels, who retired from the WWE after over two decades in the business. The entertainer now has a company MRA Hunting and still makes appearances on WWE televised shows.

“That’s one of my favorite things about pro wrestling,” Michael says of the business. “It’s those guys and girls who, when you put your time in and let the crowd see who you are and let them connect with you beyond the ring, you get to make something else of yourself.”

“I never stepped foot in the ring until after my injury, “ he says, surprisingly. “Something inside me just demanded ‘you gotta go for it.’ I worked my way back into physical activity through basketball, the gym, things like that.”

“Recently, I’ve become a big fan of trying to listen to the universe,” he states. “The universe was speaking to me and I had to answer it. I had to go for it and it worked out so well, thankfully.”

“I’d been attempting to get a job with the WWE ever since I started wrestling,” Michael said. “I was an extra on the road with them sometimes doing nothing, sometimes as an extra in the background, sometimes being a practice wrestler for someone before live matches.”

Michael almost lost his momentum towards his wrestling goal. “I saw myself making decisions that were taking me away from it, but I knew deep down, I was kind of lying to myself about it,” he says. “Once you’re in it and you do it, it takes your heart and you don’t let go.”

“A minute long video and you have an opportunity to be in the WWE? I would do myself a disservice from the art put into this business if I didn’t try,” he said, passionately, about why he chose to compete in Tough Enough.

“I just had to go for it, and my community around me, my family, my beautiful girlfriend, and my amazing mom have all been so supportive,” he says with happiness in his voice. “It kept me so in tune with it and they’ve done everything they can to support this.”

His time on Tough Enough was unfortunately short, as he found he was medically unable to continue, but it taught him many things. “It was humbling, and I thought it was in pretty good shape going in,” Michael said, who found his prosthesis was causing him issues with the vast amount of physical activity required.

“It was a big eye opener and a great moment of education,” he continues. “It let me know how much work I needed to do and to be more prepared, efficient, and be a better entertainer if I want to work there.”

Michael has found that even though he was on the show briefly, his story of overcoming adversity and his efforts have started to gain him a following. He even gained the respect of one of WWE’s giants, John Cena.

The nonprofit Active Heroes giving Michael a check to adapt his house after his injury. Photo credit: ActiveHeroes.org

“There is no better compliment from someone active on that roster and in that company,” the veteran comments, on John tweeting that Michael was an inspiration. “I want to be that guy’s peer and create with him – it was so encouraging. Couldn’t believe it and couldn’t be more thankful for it.”

In terms of living with his injury, it’s been a few years and Michael has had to grapple with some issues. He got the VA home loan, but when trying to get a grant to adapt his home for his new abilities, he was denied. That is when the organization Active Heroes, which he recommends as a resource to any veteran, helped him out.

“Humans do such extraordinary things, and I hope we can all get back to that place where we find that purpose,” Michael said about anyone, whether military or civilian, going through hard times. “It’s still worth being in this existence and being with people who love you before you move on to the afterlife. That’s something I’d say just to people having a hard time, period.”

In the end, Michael’s message about overcoming a traumatic event is quite powerful. “Beyond any type of medication, the key ingredient to fighting PTSD is finding purpose.”

VA Home Loan Centers is here for your VA home loan needs. Whether you need a loan, to buy a home, sell a home, do a refinance, or to conduct a compromise sale. Call us at 888-573-4496, like us on Facebook and tweet us @VAhomeloanctrs.